-- Coalition More Than Doubles, Urges Organizational Action and Use of Team Facilities to Increase Access to Voting Opportunities --

-- When We All Vote and RISE to Provide Voter Registration Resources -- 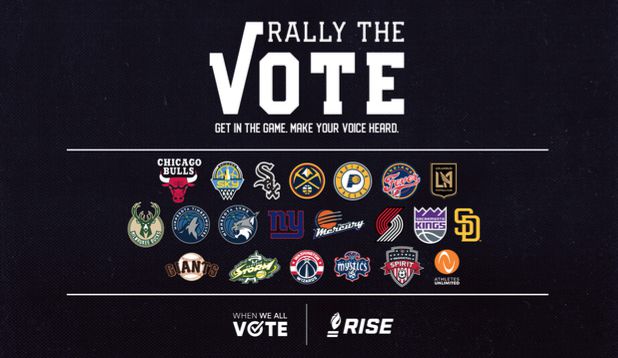 Sacramento, CA – Today, the Sacramento Kings, in collaboration with When We All Vote and RISE, relaunched "Rally the Vote," a 20-team, nonpartisan coalition made up of professional sports franchises across the NBA, NFL, MLB, MLS, WNBA and NWSL focused on encouraging fans to get in the game and make their voice heard by registering to vote and participating in elections.

According to the most recent Census data, at least 88 million eligible Americans, or one-fifth of eligible voters, are not registered to vote and of those registered to vote, only 53 percent voted in the 2018 elections. In 2016, 100 million eligible voters in the country did not vote and over 60 percent of adult citizens said they had never been asked to register to vote. To help address the registration gap, Rally the Vote has been designed to leverage team digital platforms to reach out directly to fans to promote nonpartisan voter registration and encourage participation in elections.

"There's no better way to be heard than by voting and it's important we all do our part to lower barriers to the ballot box," said Sacramento Kings Owner and Chairman Vivek Ranadivé. "The idea of 'one person, one vote' is part of the reason I fell in love with this country as a teenager. Whether you agree or disagree with your elected officials, voting gives us an opportunity to make our voices heard. At the Kings, we believe that sports teams have a unique responsibility to use our platforms for positive change, and we're excited to Rally the Vote alongside these incredible teams."

Due to the COVID-19 pandemic nationwide, there has been a dip in voter registration and as a coalition made up of digitally focused organizations, Rally the Vote teams are committed to reaching out to their fans and communities over the coming months to encourage civic engagement by using their social media platforms to raise awareness about voter participation and share reminders about voting related deadlines, reaching millions of followers across the country.

To provide additional resources to participating teams and help grow the coalition, Rally the Vote has partnered with When We All Vote and RISE, two national nonpartisan nonprofits focused year-round on raising public awareness around the importance of voting.

"When We All Vote is excited to partner with Rally the Vote as we work to increase participation in every election and close the age and race voting gap," said When We All Vote CEO Kyle Lierman. "Fans may not be able to make their voices heard in sports arenas right now, but they can make their voices heard by voting. The sports world has the power to change culture and reach people where they are. Through Rally the Vote we will reach tens of millions of eligible voters with critical registration and get out the vote information this year."

"When RISE began our RISE to Vote initiative three years ago, our vision was to empower athletes, teams and leagues to be leaders for increasing civic engagement in our country and make voting an integral part of our sports culture," said RISE CEO Diahann Billings-Burford. "The Rally the Vote coalition is evidence of the sports community embracing their role as leaders, and together, we will have a tremendous impact. Our fervent belief is that if athletes unite around the action of voting and share how important it is to take that step, then people around the country will follow their lead and be inspired to act."

To help drive voter awareness and participation, coalition members are encouraged to give employees a paid day off to vote and use their arenas and stadiums to expand access to voting opportunities this election cycle. The Bucks, Bulls, Kings, Timberwolves and Lynx, and Wizards and Mystics have previously announced that Election Day will be a paid day off for all employees. The Kings recently confirmed Golden 1 Center will be used as a Vote Center for the eleven days leading up to and on November 3, providing increased access and a safe, socially distanced site for residents to register to vote and cast ballots. Kings employees will also serve as election officers at the Vote Center to help address the expected shortage of poll workers due to COVID-19. The Bucks and Pacers/Fever will be encouraging their staff to serve as poll workers on Election Day as well. In addition, the Bucks and Monumental Sports & Entertainment, owners of the Washington Wizards and Mystics, have offered their arenas, Fiserv Forum and Capital One Arena respectively, to city officials to serve as voting sites for the upcoming election.

Rally the Vote was originally launched by the Kings on September 25, 2018 (National Voter Registration Day) as the first time sports franchises from different leagues came together as a coalition to address the registration gap by directly reaching out to fans across the country to provide a seamless way to register to vote. In 2018, the 9-team effort reached millions of people by leveraging team social media platforms and registered thousands of voters in the weeks leading up to the midterm elections.

To learn more about the goals of Rally the Vote from Sacramento Kings Owner and Chairman Vivek Ranadivé, read his 2018 op-ed titled 'Let's Uberize Democracy': How Professional Sports Teams Are Rallying the Vote.

For more information, to register to vote and take action visit rallythevote.org.