COLORADO SPRINGS, Colo. – The National Collegiate Hockey Conference (NCHC) has teamed up with RISE for the 2021-22 season to help advance diversity, equity and inclusion efforts within the conference and its member teams, the NCHC announced Monday.

RISE is a national non-profit organization that educates and empowers the sports community to eliminate racial discrimination, champion social justice and improve race relations. Through partnerships and programs, RISE aims to inspire leaders in sports to create positive change on matters of race and equality. 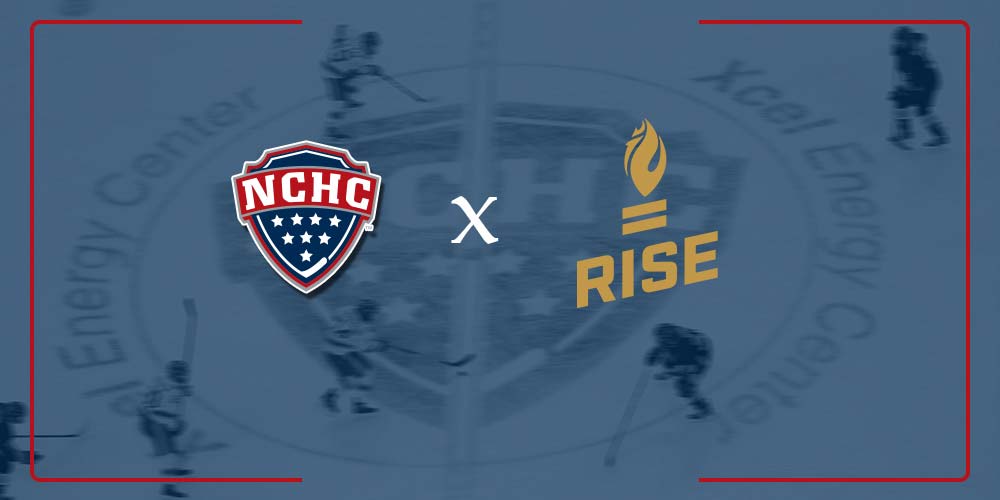 “We are thrilled to be able to partner with RISE to help increase our DEI efforts. Hockey is not typically known for being a diverse sport, but through educational opportunities with RISE we hope to start conversation within the NCHC that can lead to change within our conference and college hockey overall,” NCHC Commissioner Josh Fenton said. “RISE has partnered with several collegiate and professional sports teams previously with great success and we know this partnership will be very beneficial on the ice and on our member campuses.”

Throughout the partnership, RISE will organize and operate a range of activities and educational programming for NCHC staff and member school men’s hockey student-athletes, coaches, staff and administrators. The programming will focus on promoting diversity, equity and inclusion, as well as topics such as identity, leadership and perspective taking. In addition, everyone will have access to RISE’s digital learning courses via a Learning Management System.

Additional programming will be scheduled for coaches/staff and student-athletes, with an initial climate discussion on identity having already occurred virtually with coaches and staff. The initial student-athlete climate discussion is set for this week. Future activities, such as town hall-style discussions, critical conversations, leadership workshops, and community engagement opportunities, will be planned around results from perception surveys taken by all participants in the NCHC.

“The NCHC is living up to the historical role that sport has played in making our nation better," said RISE CEO Diahann Billings-Burford. "At RISE, we are equipping the sports community with the tools to be advocates for racial equity. Partners like the NCHC, which is committed to action, can amplify this work by bringing diverse communities together to achieve long-term impact. While the conference has had tremendous success on the ice with numerous Frozen Four appearances, the NCHC seems just as dedicated to taking meaningful steps that bring sustained change, and we're excited and proud to partner with them."

RISE is a national non-profit, founded in 2015, that educates and empowers the sports community to eliminate racial discrimination, champion social justice and improve race relations. Through partnerships and programs, RISE inspires leaders in sports to create positive change on matters of race and equality. RISE programs build skills and create safe spaces to have difficult conversations. RISE equips students, athletes, coaches and administrators with the tools to be culturally competent, effective advocates for racial equity and leaders in addressing racism, prejudice, diversity and inclusion. RISE's vision is to create a nation unified through sports committed to racial equity and social justice. For more information on RISE, visit their website at risetowin.org and follow them on social media @RISEtoWIN on Twitter, Facebook and Instagram.

About the National Collegiate Hockey Conference:

The NCHC is an eight-school NCAA Division I men’s hockey conference that is entering its ninth season of competition in 2021-22. Its members are: Colorado College, the University of Denver, Miami University, the University of Minnesota Duluth, the University of Nebraska Omaha, the University of North Dakota, St. Cloud State University and Western Michigan University. Since the NCHC began play in 2013-14, 27 NCHC programs have qualified for the NCAA Tournament, including 12 Frozen Four berths and four straight national champions from 2016-2019. For more information, visit the NCHC website at www.nchchockey.com and follow the conference on social media @theNCHC on Twitter, Instagram and Facebook.