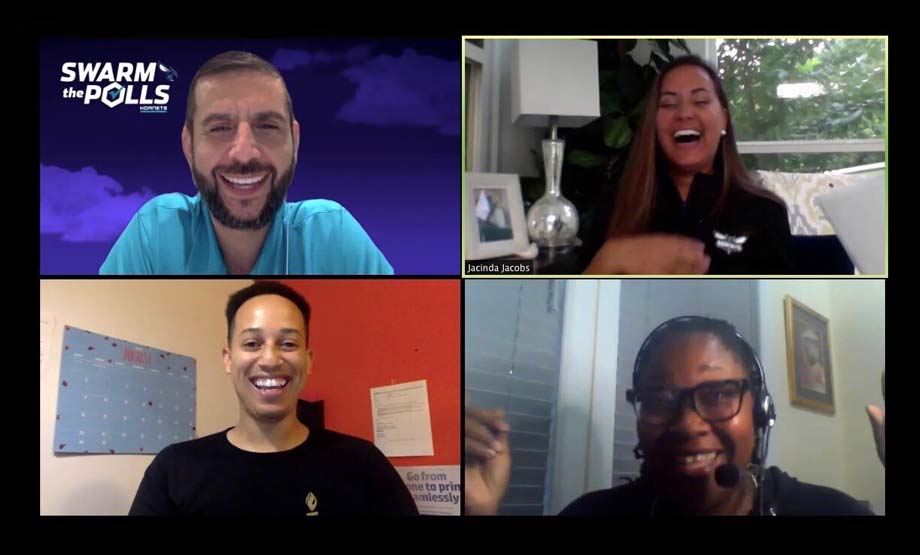 Beginning in 2017, RISE was the first organization focused on empowering the sports community to become national leaders for improving civic engagement and voter participation in our country. RISE created its non-partisan initiative, RISE to Vote, equipping athletes, coaches and staff at all levels of sport with the tools and knowledge to register to vote, participate in elections and inspire their fans to get involved and become informed and engaged citizens.

Three years later and with our country sitting squarely at a crossroads, RISE has helped leverage the power of sports to contribute to a record turnout in the 2020 U.S. election. Over the last few months alone, RISE has held nearly 90 RISE to Vote voter registration and education sessions with professional teams, leagues, college athletic departments and more. More than 5,000 athletes, coaches and staff across the MLB, MLL, MLS, NBA, NFL, NHL, WNBA and NCAA participated, and RISE held several public virtual events with leagues and teams that reached more than 100,000 fans.

Additionally, RISE, along with When We All Vote, joined the Sacramento Kings-led Rally the Vote coalition, a group of more than 50 pro teams that encouraged their fans to register and vote. RISE provided voter registration and education resources to teams and helped expand Rally the Vote, which included teams from the NBA, NFL, MLB, NHL, MLS, WNBA and NWSL as well as leagues such as the NHL and MLL. Many of these organizations opened their stadiums and arenas as polling locations on Election Day.

The NFL also tapped RISE to be an official partner of NFL Votes, a league-wide, non-partisan initiative that supported and encouraged the civic engagement and voting of NFL players, Legends, club and league personnel, and NFL fans. Through the NFL Votes partnership, RISE held sessions with more than a dozen NFL clubs, several of which would go on to create voter PSAs with RISE or hold public voter education and registration events for students and fans, including the Detroit Lions and Denver Broncos. Several teams reported 100 percent of their players were registered by Election Day.

"There was a lot of information given, but there was time for questions and guys could really voice their concerns about voting, about info on candidates, about registration and about how some don't have any experience in that arena and they want do right by their vote but are not sure how," Jacksonville Jaguars receiver Chris Conley said of a RISE to Vote session with players and staff. "We were able to get those questions answered, some guys were made a lot more comfortable and some had their interest piqued to do more research and learn about the history of the vote."

RISE has also had an extensive partnership with the reigning Super Bowl champion Kansas City Chiefs, holding a RISE to Vote voter registration and education session for players, coaches and staff, and working with the team to encourage fans to register and vote. Former NFL MVP Patrick Mahomes and two-time All-Pro safety Tyrann Mathieu helped lead the RISE to Vote session, and it was through that session that Mahomes learned his registration had been denied.

"If we weren't having this meeting, I wouldn't even know that I wasn't registered," said Mahomes, who was under the impression he had taken the necessary steps to register. "That's why we partnered with RISE. They have the tools to make sure that we as leaders in the community can get registered."

Mahomes would later contribute $50,000 to help turn Arrowhead Stadium into a polling location on Election Day.

On Sept. 22, RISE held a voter education session with the NHL. As part of the hour-long conversation, the Winnipeg Jets' Blake Wheeler, JT Brown of the Minnesota Wild organization and Earl W. Stafford of Monumental Sports & Entertainment joined RISE CEO Diahann Billings-Burford for a conversation on the importance of civic engagement. Around the same time, RISE held sessions with the Chicago Blackhawks and Florida Panthers.

Said Kevin Washington, Texas football's Director of Player Development: "We tell people to vote all the time, but if you don't tell them what they're voting on or how to vote or the different nuances – the system is set up for you to not to want to be a part of it. So it's about educating about how to do it.