The Detroit area schools don't regularly face each other in varsity sports and their student bodies come from different socioeconomic and racial backgrounds. But earlier this fall, they came together through RISE for the sake of building bridges across communities. Plymouth and Cass Tech Boys Varsity Soccer teams held a RISE game September 7 at The Corner Ballpark at Detroit PAL, the site of RISE's Midwest office.

Before the field became the site for their competitive match, the two teams took the field together, and participated in RISE leadership activities. The activities focused on identity and diversity, and challenged players to better understand each other's perspectives and how they as student-athletes can be leaders for tolerance and inclusion in their schools and community.

"There's more than one way of viewing the world and it's important to understand different perspectives, and the best way to do that is by interacting with different people," said Luke Winters, a senior co-captain at Plymouth. "It was fun to bring different cultures together and play a game in Detroit like that. We all have the same love for the game and we're all made equal, no matter religion or race, so it's important we treat each other with respect."

Plymouth won the game 3-2, but both coaches agreed the more valuable lessons were learned off the field. RISE's multi-week leadership program has been administered with various teams and sports at both schools over the past four years, but the opportunity to experience RISE's curriculum with students from other schools and backgrounds allowed for deeper engagement.

"I think some of the boys recognized the privilege that they have, and being able to recognize that helps you be aware and understand what that means and the relationships you have when you're exposed to other cultures," said Plymouth Coach Glenn Liguori. "On our team, it's not a highly diverse group when it comes to race, but they were able to recognize what it means to be diverse beyond that and understand the importance of the language people use when talking about race and diversity and that came up a few times throughout the season."

"For us here at Cass, we represent a mosaic. We have Mexican kids, Honduran kids, students from Africa, Hindu students, Muslim students. That's who we are," said Cass Tech Coach Phillip Jack. "So for us, with RISE, it was a great fit to be a part of this."

The schools plan to continue facilitating RISE programming for their student-athletes and hope to continue spreading the message of unity and diversity in an annual RISE game going forward.

"We want to help get the word out about the RISE program so that when we have the game again next year we can bring together more schools and you can see how this program impacts these kids," said Liguori. "It creates an inclusive environment."

"We want to share with the rest of the community in Detroit that racial differences don't matter when it comes to winning," said Jack. "If you look at our team, that doesn't matter. Our team is diverse, and we want to make sure we can project that message that you can operate with one voice and win with diversity. We want to share the experience we have here so other people can see that unity is easily achieved. RISE happened to be the perfect vehicle for us to show the world that." 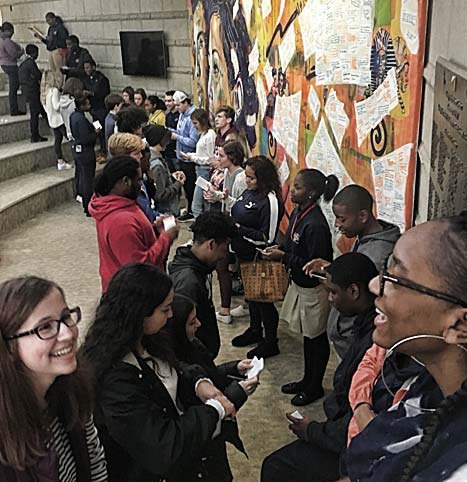 Students from Saline High School and the Jalen Rose Leadership Academy have engaged in similar work.

Saline is predominately made up of white students. The large majority of JRLA students are African Americans. Students from both schools realize the importance of expanding their horizons, and came together through RISE last fall to learn about each other, the value of diversity and how they can become leaders for inclusion both in their schools and beyond.

On Oct. 29, juniors and seniors from JRLA and Saline visited the Charles H. Wright Museum of African American History in Detroit for a RISE workshop that promoted cross-cultural dialogue and challenged students to better understand different perspectives and experiences.

"It was an incredible experience for both schools to further each other's understanding of race and open up channels of communication among kids that wouldn't normally interact," said Brian Lampman, who teaches a course at Saline called, ‘Exploring Race and Ethnicity.' "Our kids talked about having a big white population at our school and the JRLA students talked about having a large black population at their school, so it was a chance for us to talk about issues that face both of us and to have an open dialogue about striving for a just society."

"Great leaders have to be able to lead everybody, and must have understanding and empathy for people who come from a different place," said Dr. David Williams, JRLA's Director of College Graduation. "Diversity, equity and inclusion are values you have to believe in in order to be a great leader, so the earlier we can expose our students to these types of programs and provide opportunities to work with people who are different form them, it's great and very impactful."

Both Lampman and Williams said the program was valuable in exposing students to unfamiliar races and cultures to overcome stereotypes and prepare them for the future.

"When you don't have these types of interactions with people of different races, you believe whatever is portrayed about them in entertainment or in the media, but when you get to know someone personally you break down stereotypes," Williams said. "We know that a significant group of our scholars will be going to PWI's for college so to give them the opportunity and exposure to be around people who don't look like them and have different experiences, and to have a structured program led by RISE to discuss these topics was beneficial."

Said Lampman: "That physical contact and connection is critical to creating better understanding."

They also both believe these interactions will have a positive lasting impact, and hope to seek more opportunities to bring their students together.

"We were inspired by RISE and wanted to come together to make this happen," Lampman said. "Too many times as school administrators, we have one opportunity to do a program like this and then say, ‘that's it, we did it,' and move on. But we want to continue these conversations and learnings, so the goal is get together again sometime in January or February and then once again in the spring… From this program, the students got hope, they got energy and a renewed commitment to the importance of their work as leaders."

Said Williams: "The students were really able to have the dialogue they wanted to have with the other students who have different experiences than them, and in the end they created new relationships and friendships."