Tiki Barber's initial reaction was the most common one. Asked if he knew the difference between equality and equity, Barber paused. They're the same thing, he believed at first thought.

"But they're really not," Barber said, "and until you understand the subtle but important difference, it's hard to progress."

Equity is becoming an increasing part of the national discourse around systemic racism and discrimination. Earlier this month, Barber, the legendary New York Giants running back, dove into the differences of the oft-confused words as moderator of a RISE Digital Learning Series webinar on Equality vs. Equity for hundreds of New York City students. Joining Barber as panelists were Giants' lineman Nate Solder and RISE CEO Diahann Billings-Burford.

"In many ways, America has focused on equality but the difference between equality and equity is people are not having equal experiences because of equality," Billings-Burford explained. "In many ways we have equality – technically we all live by the same laws – but we don't have a fair system because we're not having the same experience under those laws.

The webinar began with an educational lesson from RISE VP of Curriculum, Dr. Andrew Mac Intosh, on the differences between equality and equity. One way to think of it, Dr. Mac Intosh said, is that equality is like a team all getting the same pair of cleats. Equity, however, is each team member getting the size and type of cleat that gives them the best chance to succeed. 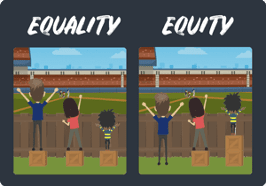 The prevalence of social media has caused many of these conversations around racial equity, discrimination and race relations to occur on those platforms where characters are limited and nuanced conversations are difficult. That's why Solder said it's important to bring people together face to face, whether in-person or virtually, to build the relationships and trust required for thoughtful discourse.

"These ideas are not so simple, you know? They are complex. They are difficult," said Solder, a former first-round pick and two-time Super Bowl champion. "You have to have them in a trusting environment with people that see the world differently than you do, that come from different perspectives and different world views than you. That's really valuable."

Serving as a somber backdrop for the panel conversation was the tragic killings of George Floyd, Breonna Taylor and Ahmaud Arbery. The discussion began on the role athletes should play in affecting change on issues of police-community relations, racial discrimination and social justice.

Barber, reflecting on his 10-year NFL career, said he know he's lived the kind of life few experience. It's why he recalls smiling throughout games every Sunday even while dodging linemen and linebackers twice his size. As he became an All-Pro running back and worked his way into Giants lore, he realized the constant attention on him and why he needs to use his unique circumstances to advocate for change.

By the end of the lesson, energized by the discussion, questions from students and need for equity, Barber was advocating for equity on his CBS Sports TV and radio show, Tiki and Tierney, to audiences across the country.

"As I got older and started to refine who I was and understood who I was and what my actual power was, I knew I had to continue to do these [off-field and community] things, and I always will," Barber said. "People want to interact with athletes and want to have conversations with athletes.

"And if an athlete is smart about it and educates himself, he can talk specifically and strongly about issues that affect him and the world at large."

That doesn't mean people who aren't athletes and don't have a global platform should not be active in creating change, the panelists continued. After the panel, the students were allowed to ask questions and voice their thoughts, and Elyse, a young New York City student, explained how she has seen the idea of equity being shared in her own communities, lately.

"I feel a lot of people don't realize we don't have equity now," she said. "I think just by sharing it – I know a lot of friends on social media and myself included have been reposting images and awareness things – it gets me to thinking and that's a great benefit as I know more people are getting involved."

As the webinar came to a close, Billings-Burford provided a final thought.

"If we want to follow the right values, if we want to do justice," she said, "then it requires equity."