As his players witnessed and experienced the beginning of our country’s national reckoning on race last summer, Dan Finger knew he had to say something to his team. He just wasn’t sure what to say.

Finger, who is white and serves as the head football coach at his alma mater, Whitney M. Young Magnet High School in Chicago, sought guidance from an old college professor who had inspired him to read the autobiography of Malcolm X as a student.

The advice? Even if you don’t have the exact words, time is of the essence, he said, and your players need you to speak up.

“Sometimes you can say I don’t know what to tell you right now but you’re loved and I’m here for you and I know this is really hard for you,” Finger said. “It hits me each and every day more and more and more how much of what we [coaches] talk about impacts them. … If all we emphasize is ball security and tackling, then we’re not doing our jobs.”

Fast forward a year later and Finger now has a whole new playbook of conversations and activities to engage his players on these critical issues. Finger was one of approximately 40 Illinois high school coaches who took part in a RISE Coaches Leadership Series with the Chicago Bears this spring. The three-part virtual series featured RISE’s curriculum and equipped coaches with the skills and knowledge to effectively discuss and address matters of racism and injustice with their teams, schools and communities.

“As coaches, it is our responsibility to be leaders not only on the field, but off of it as well,” said Bears head coach Matt Nagy. “Providing training and resources for high school coaches to learn how to address racism and injustice is a critical component to cultivating a strong and welcoming team culture.”

The series began with activities focused on identity and defining key terms including race, racism and anti-racism. The second week of the program included interactive workshops on Equality vs. Equity and Bias, which challenged coaches to acknowledge assumptions, values and predetermined opinions they may hold, while learning to recognize their own biases, where they may come from and why they are important.

“Being able to understand those definitions and use the right language with my family, with my [players] is really helpful.” Finger said. “To create a space where we can do this and it’s not just some professional development opportunity, it’s a real space where we’re thinking and connecting and opening wounds that need to be opened and addressed, I really got a lot out of that. … And then beyond that, it’s not just going to impact me; it’s going to keep on giving years from now as we talk about this with our kids and hopefully change a lot of lives.” 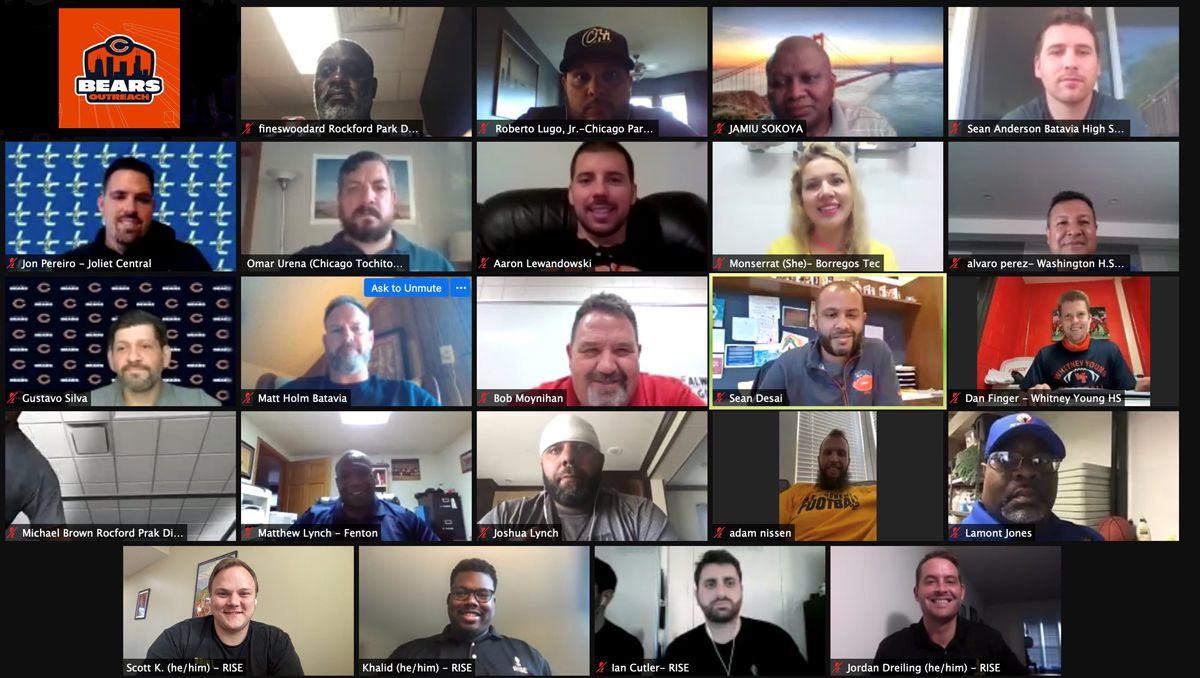 In the third session, Bears defensive coordinator Sean Desai, the first Indian American to hold that title for an NFL team, joined the program to speak to coaches about his own experiences and the concepts of privilege and power. He emphasized the importance of using one’s privileges to advance equity and inclusion and how sport can be used as a vehicle for change.

That message resonated with Adam Nissen, the head football coach at St. Laurence High School in Burbank. He had some of his assistant coaches join the RISE program to help build a stronger, more inclusive culture that starts with his team but extends well beyond that.

“These are issues that need to be reinforced by everybody in our program, not just me,” Nissen said. “This has to be something reinforced by coaches, parents, administrators, everybody. These aren’t just football-specific issues. … Our school is racially and socioeconomically diverse, and I’m a big believer in using sports to bridge some of those gaps that we see. I thought getting my assistant coaches on board to hear this from someone besides me is really important.”

Before the series concluded, coaches participated in a virtual privilege walk. They were given prompts that described scenarios, ranging from “I know where I’ll be living next month,” to “I’ve never been threatened with violence because of my race or ethnicity,” and challenged to write down if each statement were true or false based on their own lived experiences.

After the session, Finger shared how he intends to use the activity with his players this summer, and how one prompt from the privilege walk - the ability to advance professionally in your given field - opened his eyes to the privileges he has as a white head football coach. While Finger has prioritized hiring a diverse coaching staff to reflect the diversity of Whitney Young’s student body, its namesake and the city of Chicago, he realized he could be doing more to create a more inclusive culture, and the ability or flexibility to pursue your desired career is in itself a privilege.

“It’s hard to think of a privilege as working really long hours and not making a whole lot of money, but I realized a lot of people can’t do that, and it’s mostly people who don’t look like me who can’t do that,” Finger said. “So what can I do, not just for our kids, but within our profession, how can I support candidates who don’t have the privileges I did, to be able to really impact our kids and kids across the country?

“There are great candidates who I’ve offered jobs to who say, ‘I can’t afford to only make $1600 for all that work,’ and I understand. That was me except my family helped me when I got started, and I only have one mouth to feed at home right now. I have a Black defensive coordinator and a Latino offensive line/assistant head coach, and I thought, ‘I’m doing something.’ But it’s still not nearly enough, and that’s what I realized.”

Matthew Lynch, the head football coach at Fenton High School in Bensenville said he is one of the few Black head coaches in the state. Lynch has taught players values of empathy and racial equity throughout his entire career, and he too wants to bring the privilege activity coaches did during the RISE series to his school to spark discussions among teachers, students and administrators. Lynch said he appreciated how the series brought coaches of all backgrounds together and created opportunities to learn and listen from each other.

“While there’s a wide range of coaches who participated in this program, there are a lot of guys who may not have experienced certain things but were willing to listen and put themselves out there to learn and be vulnerable,” Lynch said. “Even though they may not have shared those injustices, it doesn’t mean they’re not willing to dive in and make things better. You can’t learn empathy if you’re not willing to listen to someone else’s story. Getting some time to fellowship with other coaches and see where they come from and also be heard so they can learn was important.”

RISE and the Bears will hold a similar leadership series for youth coaches across Illinois next month.

“To have these activities, these precise definitions, these ways to facilitate the discussion, now I’m really excited that we’re going to be able to put that in action and watch these kids grow and learn from their perspectives,” Finger said. “It was really productive to hear the perspectives of coaches through this series, who I didn’t know so well, but there are kids who I’ve coached for three years, and I’m going to learn more how I can serve them because of these discussions.”