Equality and equity are two processes through which, as a society, we try to achieve fairness. Though often used interchangeably, equality and equity are quite different. Equality is based on the belief that all people should have the same opportunities to be successful and have a productive, enjoyable life. Equality is rooted in fairness since it is linked to another American ideal, that of a meritocracy. Equity, on the other hand, recognizes that everyone doesn't begin in the same place in society. Some people face adverse conditions and circumstances making it more challenging with the same effort to achieve the same goals. Equity advocates for those who may have been historically disadvantaged, making it difficult for them to be successful. What is "fair" as it relates to equity isn't a question of what is the same but rather, the point from which a person begins. In this topic we will explore both these concepts and consider the similarities and differences between the two often confused terms.

"Treating different things the same can generate as much inequality as treating the same things differently." — Kimberlé Crenshaw 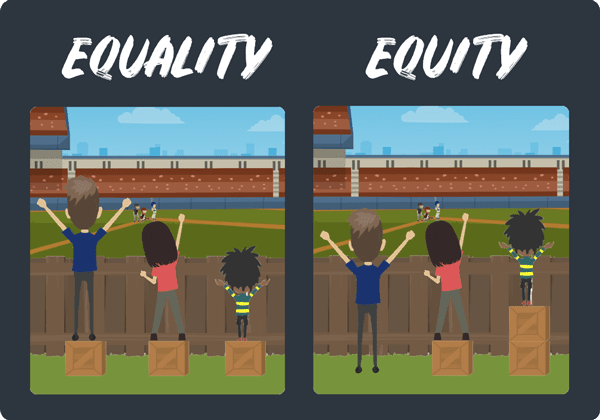 All men are created equal. Equal rights. RISE, the Ross Initiative in Sports for Equality.

In the United States, equality is a nearly universal aspiration. The "American Dream," in its various forms, is often centered around the concept of equality and opportunity. Striving for equality and championing the virtues of the term is admirable and often leads to progress and growth.

However, like the white picket fence and the "American Dream," equality can also be a clichéd word with little meaning or basis in our nation's reality. And oftentimes, what is deemed equal may in fact favor people in power, particularly white people, men, the wealthy and other privileged groups. The concept of equity, on the other hand, is less common in its use. For many, equity and equality are used interchangeably. In fact, the two terms are not the same, and often, application or pursuit of equality without consideration of equity is not enough and leaves people behind, resulting in unequal outcomes.

At RISE, we teach that equality means everyone is treated the same exact way, regardless of need or any other difference. Equity means everyone is provided with what they need to succeed. In an equality model, a coach gives all of their players the exact same shoes. In an equity model, the coach gives all of their players shoes that are their size. While these sports examples are simplistic, they illustrate the necessity of equitable consideration in order to provide equal opportunities for success for as many people as possible. It is hard to win a race when your shoes are the wrong size, or perhaps, they have been custom-built to provide an advantage for someone else.

Athletes have long been fighting for a more equal or equitable share of the vast profits generated by competition, often at their own peril. Former MLB All-Star Curt Flood was a pioneer in this regard, appealing a case tied to his free agency all the way to the U.S. Supreme Court. Flood tied this fight directly to his race and racism, saying "I think the change in black consciousness in recent years has made me more sensitive to injustice in every area of my life." While Flood did not win in court, his struggle forever changed free agency and gave athletes more power in baseball and throughout sports. Flood's fight and sacrifice resulted in greater equity for his peers and those that followed.

More recently, the U.S. Women's National Soccer Team has been engaged in a legal battle often described as centered around equal pay. Midfielder Megan Rapinoe has been intentional in her use of both terms, equality and equity, in her statements on the matter. The topic is complicated by U.S. Soccer's contentions that its pay for their women athletes vs. men athletes is in fact equal, or equitable, given considerations and bonuses related to wins, attendance and status with professional leagues. RISE will be exploring this story further as the RISE Digital Learning Series continues.

In the long history of athletes seeking equitable gain from their labor as athletes, unions have become a common tool and structure for athletes to negotiate their compensation with ownership or leadership. Race is undeniably a factor in these power dynamics, particularly in marquee U.S. leagues such as the NBA and NFL, where a majority Black workforce is employed by nearly universally white ownership. In recent weeks and months, these unions have again taken center stage as negotiations take place related to the COVID-19 pandemic. In the NFL, an agreement was reached nearly immediately prior to the most severe impact of the pandemic.

As leagues, teams, governments and individual players navigate a potential return to play, decision-making power in a potentially deadly scenario is not equitably distributed. With the exception of a survey sent to players by the NBA Players Association (distinct from the league itself), there have been few reports of input from players and unions on decisions to return to play. Due to longstanding power dynamics, the implicit assumption is made that players will work under nearly whatever conditions are offered to them. A more equitable future reality would have players, the workers, hold more power in these critical decisions that affect them most directly.

Thankfully, in some ways, progress in these power dynamics has been made in the last century, thanks to the efforts of players like Curt Flood and strengthening of the unions. These changes in the baseball world are detailed in this ESPN piece.

Another element of challenging and inequitable power dynamics between owners, players and unions has been imbalanced racial representation in sports leadership. This inequity has long plagued professional sports leagues in the U.S, with heavy majorities of white men amongst commissioners, owners, front office staff and coaches. The NFL's Rooney Rule was established in 2003 to address this challenge for NFL head coaches. While the Rooney Rule has occasionally been successful in raising the percentage of people of color amongst NFL head coaches in certain years, the issue of a lack of coaches of color persists. In 2020, changes to the Rooney Rule were discussed and eventually made, including an initial proposal to bolster teams' NFL Draft position as a result of hiring a person of color into a coach or general manager position. These proposed changes complicated an already controversial conversation regarding equality and equity in the league.

Equality and equity are both esteemed values, with good reason. Pursuing or applying equality without consideration of equity, we can fall short and create or perpetuate harmful, inequitable systems. By highlighting the difference and illustrating how equity can often be the best path to equality, we at RISE hope to continue to empower leaders in the sports community to do the challenging work of creating a nation committed to racial equity and social justice.

Complete this activity to learn about the difference between Equality and Equity.

Learn More to Do More

Check out this activity Equality vs. Equity from RISE's curriculum, which teaches about the differences between equality and equity, and how they can each be used to achieve fairness.

Sports as a Vehicle for Change