As we face the challenges of COVID-19, it's important to recognize that the virus has not impacted us all in the same way.

The advantages that many of us had going into this crisis have contributed to our resilience and the ways in which we have been able to respond. Conversely, those who have traditionally been marginalized in our society have had a more difficult time coping with the onset of the virus.

As we reflect on these concerns, we are reminded that more than ever, everyone needs to practice and utilize the skills of empathy, perspective taking and cultural competence. We need to stay vigilant and aware about the ways in which issues of racism and discrimination continue to impact us. 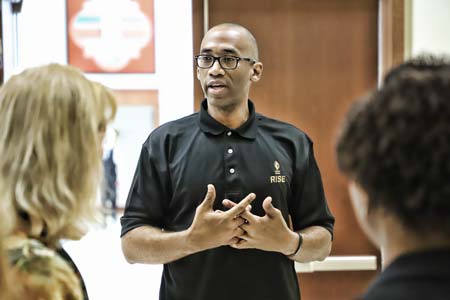 One major challenge around this pandemic has been a number of false, biased perceptions about the virus, such as the belief that Asians and Asian-Americans are more likely to have the virus or that African Americans/Black people cannot get it. Another misconception is that only older people should be concerned about COVID-19.

Quite simply, these statements are all not true. More pointedly, they are rooted in various forms of bias: racism, xenophobia and ageism.

While initial data does show that older people (along with people who have pre-existing health conditions) are more likely to have severe medical issues or die as a result of the virus, younger people are also susceptible to contracting and spreading the virus and experiencing severe symptoms. The outbreak of the coronavirus began in Wuhan, China, but it quickly became global, with major outbreaks across Europe and now the United States, impacting all people.

The Centers for Disease Control and Prevention (CDC), as well as the World Health Organization (WHO), confirmed there is no truth or validity to the belief that certain races or ethnicities are at a lower or higher risk of contracting the virus or recovering from it more quickly or easily. All persons are at risk. It is not possible to determine whether someone is more likely to have the virus based on their appearance or age and therefore wrong to target someone or assume they are infected based on their racial, ethnic or national identity. The dissemination of these false notions and rumors is harmful not only to those being discriminated against, but to our collective global efforts to combat the virus itself.

Even further, these views underscore the ways in which racism and other forms of discrimination intersect with the various institutions in our society.

Historically, specific groups have had differential access to critical resources and this pandemic has only highlighted such issues of systemic racism.

Many people have lost their jobs or seen a reduction in income due to the economic downturn, as well as public instructions to stay home or avoid certain businesses. The U.S. Bureau of Labor Statistics indicates that less than 30% of workers are able to work from home or telework, which means the ability to continue work from home and receive pay is a privilege not afforded to everyone.

Racial minorities will be more adversely impacted by these layoffs and unfortunately necessary shutdowns, given the way that race often intersects with socioeconomic status and the professions that people hold. Similarly, differential access to healthcare, insurance coverage and historically higher incidence of conditions like diabetes, heart disease and cancer, may make minorities a more vulnerable population given the current strain on our healthcare system.

The same is true in the education space. Many colleges have moved to virtual teaching to complete their semesters and K-12 institutions have provided digital and online resources to their students. Still, access to the internet is not the same for everyone across the country.

Rural and urban schools do not have the same types of internet speeds or the number of teachers who can support students while they are self-isolating. Data also shows that Blacks and Hispanics have less access to the internet than other racial groups. The Pew Research Center reported that while 82% of Whites have a computer at home, only 58% of Blacks and 57% of Hispanics could say the same.

This is undoubtedly a difficult time. As we deal with what is primarily a health crisis, we should challenge ourselves to exercise our cultural competence skills and foster greater inclusivity.

Understandably, we are physically isolating ourselves and turning inward during this time to support our families and loved ones. Still, this limits the time we have for getting to know one another better, and can unintentionally create and reinforce divides that already exist in our society.

At RISE, we use sports as a way to bring people together and teach about diversity concepts, while empowering athletes, students, executives and administrators with the skills to be leaders in addressing racism and promoting inclusion. One of the core principles of our work around diversity is that sharing more about ourselves can bring us closer together. As individuals, we foster understanding, inclusion and community by getting to know those around us better and creating a feeling of trust and sharing.

One thing I suggest we all do is to think about and discuss with someone else the ways in which our racial, ethnic and other identities have impacted the ways in which we have experienced this pandemic. Even as we face this crisis, we must ensure we are not perpetuating the inequities of our society, but instead are working to combat them.

Andrew Mac Intosh, Ph.D. holds degrees in Kinesiology, Applied Psychology and Sociology. As Vice President of Curriculum at RISE, he is responsible for the design, delivery and evaluation of RISE's leadership and cultural competency curriculum, which is administered to professional, collegiate and school-aged athletes, coaches and administrators throughout the country.