RISE IN THE NEWS

NEW YORK – Using sports to combat systemic racism and unify the country, RISE, in less than five years, has empowered more than 110 sports partners and 12,000 students, athletes, coaches and staff at all levels with the tools to be leaders in eliminating racial discrimination, championing social justice and improving race relations. 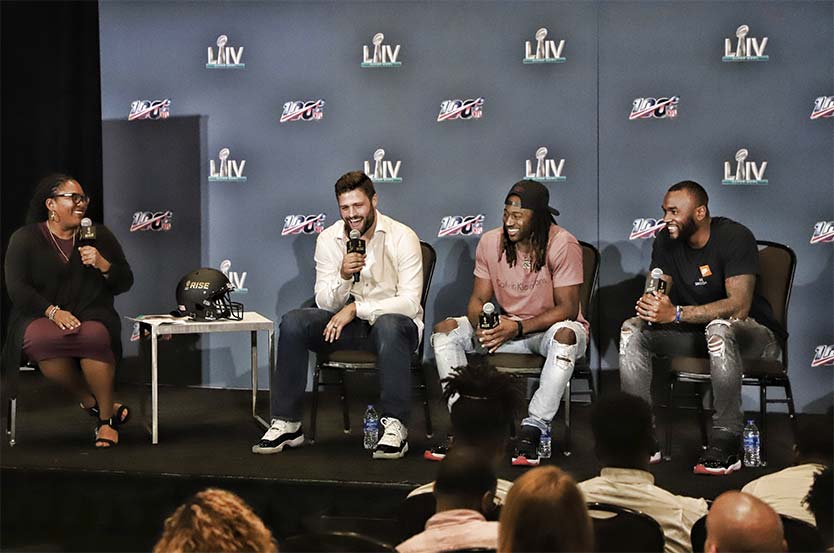 RISE CEO Diahann Billings-Burford leads a critical conversation at Super Bowl LIV with NFL players about the power of athlete activism and the need to address issues of racism, social justice and inclusion.

To enhance RISE's capacity to effect lasting change, founder Stephen Ross has made an additional long-term funding commitment of $13 million over four years, bringing his total commitment to $30 million since establishing RISE in 2015.

"Growing up in Detroit, I saw firsthand what racism did to tear apart our community, destroy lives and further inequality. I started RISE based on the belief that our nation must address the scourge of racism directly to achieve true unity," said Ross. "Now more than ever, our mission and the need for this work is clear."

Supporting RISE's critical work is the unified commitment of professional and intercollegiate sports across an unprecedented spectrum. This coalition includes every major U.S. professional sports enterprise – commissioners and top executives; every major sports media network; and national intercollegiate sports associations, including the NCAA and athletic directors. Understanding that fighting racism and creating an inclusive and equitable society requires long-term, intentional action, this new financial commitment will assure that RISE can continue its critical work and help lead the sports community in changing the country. 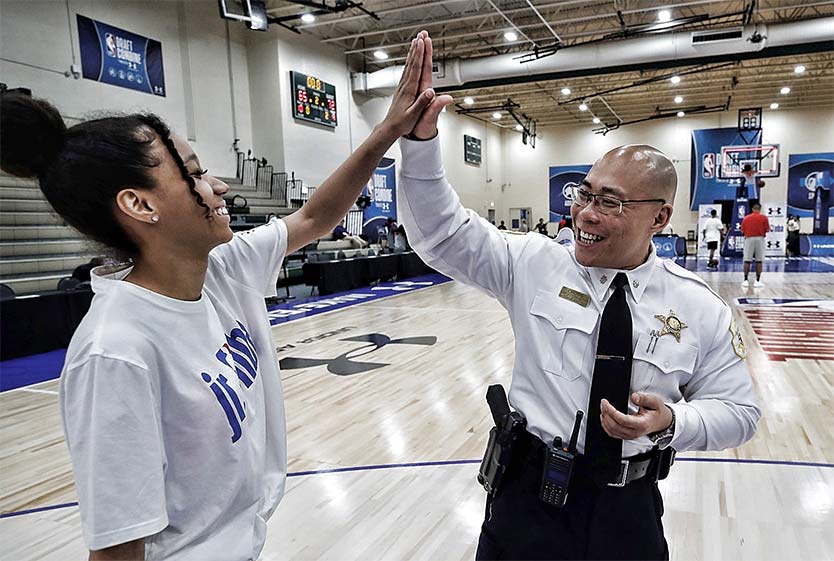 Participants of the Chicago Building Bridges Through Basketball program, a joint initiative of RISE, Under Armour and the NBA that uses sport to break barriers and improve relations between local youth and law enforcement.

"During this time of national unrest, many individuals have stepped up to being part of the solution. Stephen continues to dedicate his time, resources and vision, as he has for decades, in an unwavering commitment to ending racism in partnership with the leadership, heart and influence of athletes globally," said Troy Vincent, NFL Executive Vice President of Football Operations. "Stephen's words are backed by his actions demonstrated by his body of work to advance equality, respect and understanding as a leader in the national dialogue on race and social justice."

"In 2015, Stephen and I had several candid conversations about race; specifically, if people are born racist or if it's learned behavior. We both agreed that no one is born racist and that we needed to educate the younger generation if we were going to create change," said Golden State Warriors forward Draymond Green. "That's when Steve created RISE and I joined the board. RISE has had a real impact over the past five years and I commend Stephen for continuing to give his time and resources to combat systemic racism and continuing to move this fight forward."

RISE was established on the premise that sport rises above societal differences and unites people in a unique way that lends itself to being an effective platform for addressing the critical cause of ending racism. At an unprecedented crossroads in the country's history when these conversations are as needed as ever, RISE has deepened its engagement with community groups, players, coaches and staff from teams and leagues across the country. 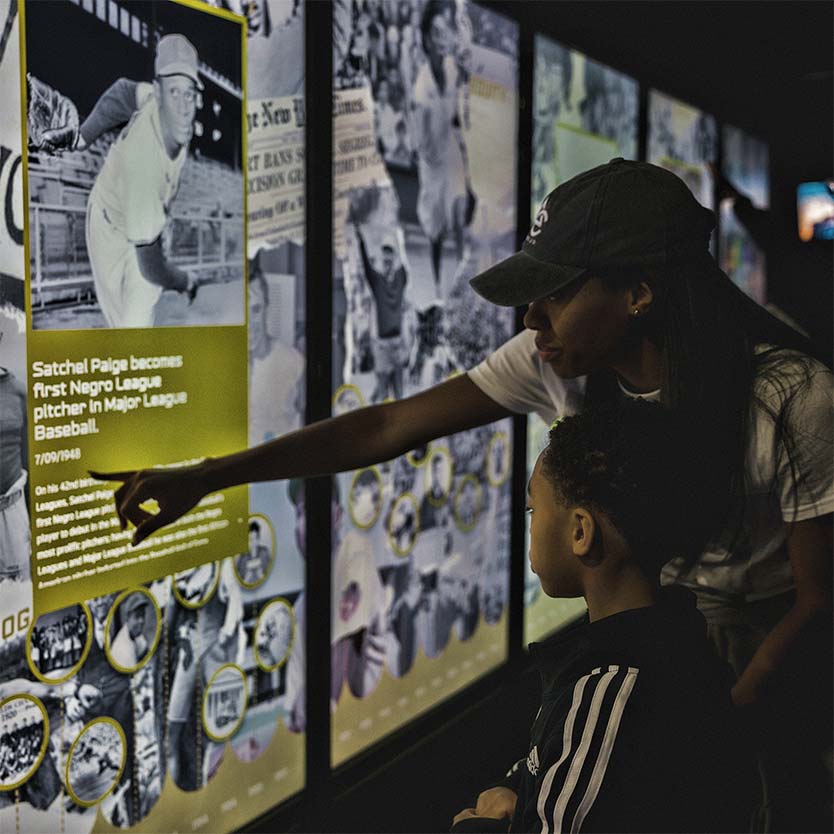 "I'm proud to be on the board of RISE, because they are part of the action that is needed to create real change," said Maverick Carter, CEO of SpringHill Entertainment and UNINTERRUPTED. "They are proactive in their efforts to address racial discrimination and improve race relations. It's not enough to talk about it. We need to tackle it head on, and I'm proud to be a part of RISE's efforts to do that."

"RISE has so much work to do, and all of our efforts require the support of leaders like Steve, whose continued commitment ensures that RISE has the foundation we need to further our mission and gain momentum," said RISE CEO Diahann Billings-Burford. "The continued collective commitment of the entire U.S. sports landscape will enable us to extend our ceaseless efforts to spark enduring change by promoting dialogue and providing tools for progress."

Over the next four years, RISE will continue empowering inclusive leadership and expanding partnerships across the wider sports community with organizations such as NASCAR, National Lacrosse League, PGA of America, Professional Women's Hockey Players Association, United States Tennis Association and USA Track & Field. It will also enhance its Champions of Change activation, an innovative multi-sensory experience that educates fans on the impact of sports on civil rights, evokes empathy by sharing the athlete's story and perspective on race and inspires fans to take action in advocating for racial equity. 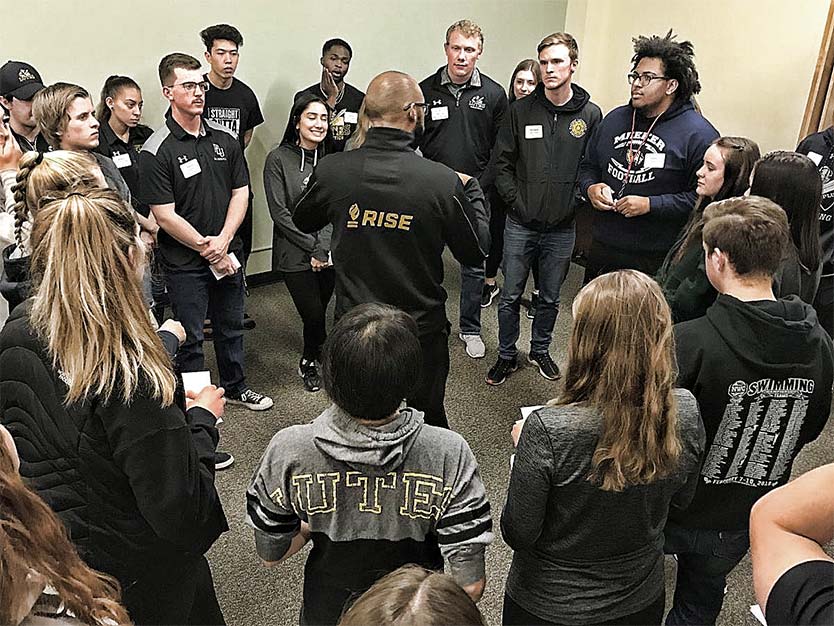 RISE facilitates a diversity and leadership workshop for student-athletes at Pacific Lutheran University.

"RISE is a terrific coalition of professional, collegiate and other sports organizations that lead community-based programs to address racism and racial inequities. Now is a critical time to get beyond old promises and flawed ideas--to reach out broadly, engage diverse, motivated allies and produce results," said Paul Tagliabue, RISE Co-Chair and former NFL commissioner. "Unfortunately, we find every day destructive forces in America that condone racism and promote division."

"America has always looked first to sports as a way to move past our differences and bring communities from every pocket of the country together regardless of race," said Max Siegel, CEO of USA Track & Field and a member of RISE's Board of Directors. "Stephen's commitment to using the power of sports to fight racism and social injustice sends a powerful message. In only a few years, RISE has utilized its place as a pioneer by bringing awareness and inspiring an immeasurable amount of change through every level of the sports community, but as we are seeing now, this work must be ongoing and has never been more important." 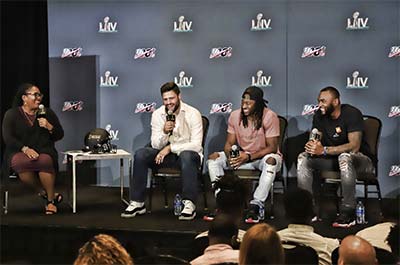 RISE CEO Diahann Billings-Burford leads a critical conversation at Super Bowl LIV with NFL players about the power of athlete activism and the need to address issues of racism, social justice and inclusion. 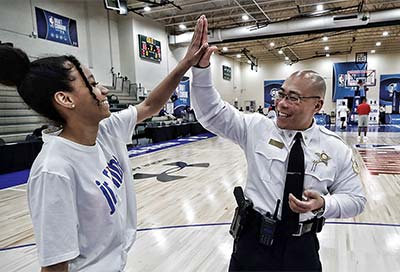 Participants of the Chicago Building Bridges Through Basketball program, a joint initiative of RISE, Under Armour and the NBA that uses sport to break barriers and improve relations between local youth and law enforcement. 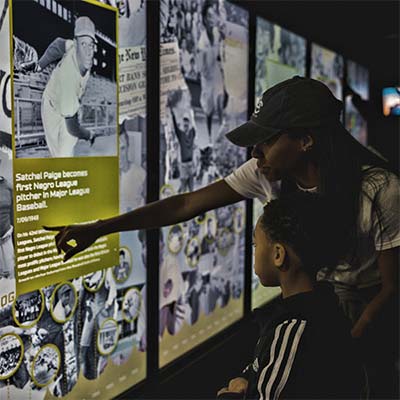 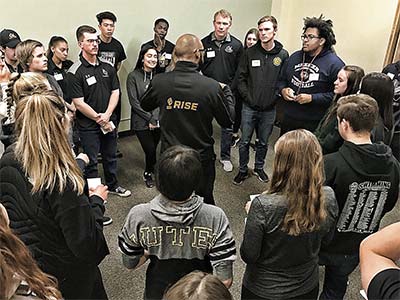 RISE facilitates a diversity and leadership workshop for student-athletes at Pacific Lutheran University.